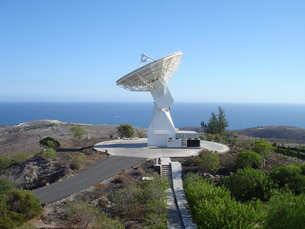 Maspalomas station hosts a 15-metre antenna with reception in S- and X-Band and transmission in S-band. It is located on the campus of the Instituto Nacional de Tecnica Aerospacial (INTA), in the southern part of the Canary Islands' Gran Canaria, at Montaña Blanca. The station provides routine support for ESA's Cluster mission and back-up and LEOP (Launch and Early Orbit Phase) support to other missions.

The station has a frequency and timing system, a monitoring and control system and communications are enabled via the ESA Operations Network (OPSNET). The site is equipped with a no-break power plant.

It is planned to upgrade the terminal for X-band transmit and receive capability in the future.

The station supports missions for ESA via ESOC, as well as missions for EUMETSAT (European Organisation for the Exploitation of Meteorological Satellites), JAXA (Japanese Aerospace Exploration Agency) and COSPAS-SARSAT (International Satellite System For Search and Rescue). 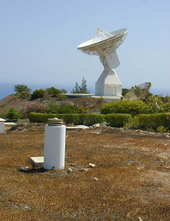 It routinely supports ESA's four-satellite Cluster mission, and in 2006 also provided support to Kompsat-2 and MetOp-2. It was also used during ESA's highly successful SMART-1 Moon mission and for Japan's ETS-7 rendezvous mission.

The station was originally built for NASA's Mercury program, and from 1960–1975 the station supported Mercury, Gemini, Apollo, Apollo-Soyuz and Skylab. The station is operated by INTA (Instituto Nacional de Tecnica Aerospacial) in cooperation with Ingenieria y Servicios Aerospatiales for ESA.

A GPS-TDAF (GPS Tracking and Data Analysis Facility) dual-frequency receiver system with geodetic accuracy is installed on the site, which delivers continuous measurements to the ESOC Navigation Facility.

Maspalomas station is in the municipal district of San Bartolomé de Tirajana. The site is about 1.6 kms from the main road which goes from Las Palmas city to Mogán and 1750 metres from the coast.

The postal address of the station is:
INTA Estacion Espacial de Maspalomas