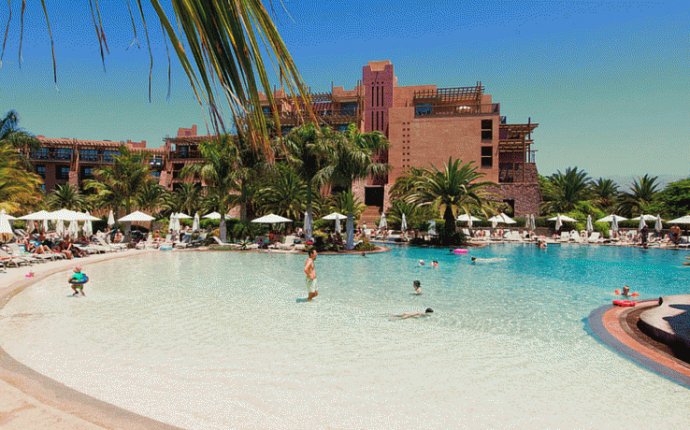 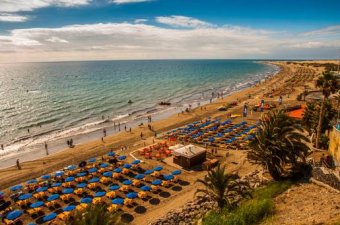 Brendan takes his family to an African-themed resort on Gran Canaria. How will their sunshine safari go?

Brendan takes his family to an African-themed resort on Gran Canaria. How will their sunshine safari go?

At what point do you decide that relaxation has set in?

Is it when you wander into the area where the kids club is on and you find one of your own nearby frantically wheeling around in her new pal's wheelchair while a parent from each side of the equation chat casually, paying no huge attention, apart from the friend's father offering the odd tip on wheelchair control?

Is it when you start allowing the kids to wander the vast complex on their own, letting them head off on the afternoon trek to the ice cream counter together every day while you lounge by the pool?

Or indeed is it when you don't feel the need to hover over them in the pool, and you let them jump in and out on their own, while keeping half a watchful eye from dry land. But poised obviously, and ready to pick yourself up if you need to. But really only if absolutely necessary.

I was gone fairly native myself by day three, wandering around, if you'll pardon the image, barefoot and topless in my togs. And it made it all the sweeter that at home the worst of the winter was raging.

Brendan chills with the resort zebra

In part I put it down to the African vibe at the Lopesan Baobab Resort. We may have been in Meloneras in Gran Canaria, but once you were swallowed up by the huge complex, you were in Africa. And as much as I hate a theme, it worked. The African decor, and even the fake wild animals, which seemed a bit naff on first inspection, created a certain mood that was conducive to switching off and forgetting that the outside world, and home and work even existed.

The kids even went on a safari around the grounds one day. All the more time for me to sit on my ass.

There is something incredibly liberating too about just succumbing to a large property that has everything you need. Bar the odd wander out to the chi chi shops of Meloneras, which were right on the doorstep, we didn't feel the need to go anywhere, to do anything much. Because it was all there. 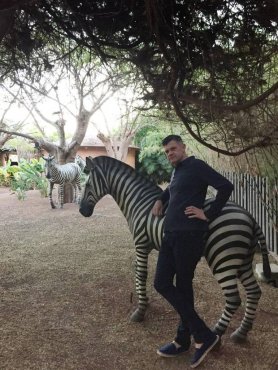 So the intrinsic tension of a holiday with kids, where they want a routine and to just hang out, whereas you are feeling the need to go somewhere and see something, even though you know it'll end in tears, was not present.

Perhaps it helped that it was winter. So we were all on the same page. We just wanted to chill, take the sun, get in and out of the pool, and of course eat. And the fact that you could pop out for a game of air hockey - our unofficial family holiday sport - or that I could make the odd sortie down to the beach early in the morning and have a little dip, or that my wife could join the early morning runners along the promenade, all stopped it from getting claustrophobic.

But really, it was liberating to just get on a plane, land in this place, and instantly just throw off your clothes and chill.

Lopesan Baobab Resort in the south of Gran Canaria

Call me a bad parent, but I liked that the waiters prowled the kids pool area after kids club so we could have a well-deserved late afternoon beer brought to us while the kids entertained each other on the waterslides. It beats having a tense exchange in a hired car about how the co-pilot had one thing to do which was to look for the turn off the motorway.

And, of course, the family is a symbiotic organism in these situations. If Dad's relaxed, everyone can relax, if Mum is relaxed Dad's relaxed, and if the kids are relaxed Mum can relax and relaxation seems to flow between us all telepathically. I honestly think it's the first holiday where there hasn't been a screaming match full of recriminations by day three, as people adjust to being together 24/7.

I think I even conquered the buffet this time. For many years now I have been battling with a dysfunctional buffet syndrome. It's a kind of an Irish thing, whereby you think it's a shame to let all this food go to waste, therefore you need to eat it all. This time out I came to a new realisation. That the reason all the food of every kind is there is so that they will have exactly the right thing that you want at any one time. And the trick is to pick that and enjoy it. You don't need to try everything. You are not getting one over on the people in charge by having three dinners at every sitting. It's actually a form of self harm, propelled by some kind of buffet Fomo.

Don't get me wrong. I still had my traditional holiday three-course breakfast: the fruit course, followed by the egg course, followed by the donut course. And lunch was pizza by the pool, and maybe some of Junior's chips while she wasn't looking. But in general, the food was delicious and you didn't need to have a carb fest. Of course you could in this situation be crazy and decide you needed to get out of the complex and go to a real restaurant.

But at what real restaurant can the kids wander off getting their own dinner and trying everything, while you stand over the guy cooking your steak telling him exactly how you want it done. And save your sympathy for the steak guy, and give it to the egg guy instead. I just stopped short of stepping over the counter to fry the eggs to the perfect point myself. They were extremely patient in fairness.

By the end of the week, we had it all down to a T. We knew which of the several pools we liked - the serene infinity pool with decking on the edge and just a touch of an African lodge about it - we knew our routine for the day, and the kids knew their way around so we saw less and less of them.

The younger one went from a toddler to a young lady in swimming years, and the older one even joined some swimming lessons for four days - unheard of for her.

We went home not having seen anything new or gone to any galleries or having lived like a local. We had done none of the things we put pressure on ourselves to experience on a holiday. Instead we had relaxed, put no pressure on ourselves, enjoyed each other, the kids were like little fish, we were all great pals, and we'd had the sun on our bones. Right now, a few weeks later, it almost feels like a dream that never happened.