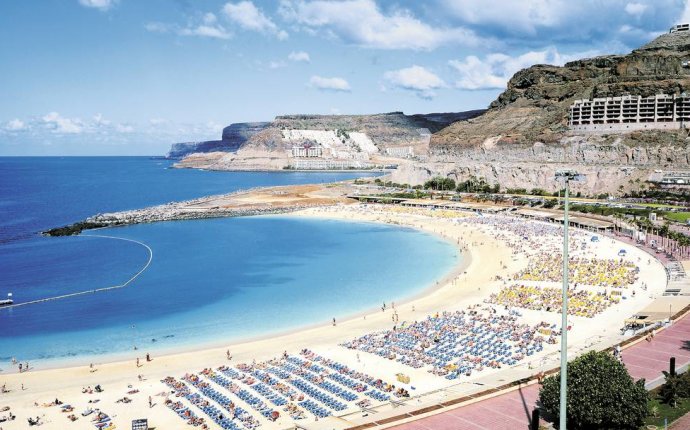 The month of January at Gran Canaria Airport experiences essentially constant cloud cover, with the percentage of time that the sky is overcast or mostly cloudy remaining about 31% throughout the month.

The clearest day of the month is January 31, with clear, mostly clear, or partly cloudy conditions 71% of the time.

A wet day is one with at least 0.04 inches of liquid or liquid-equivalent precipitation. At Gran Canaria Airport, the chance of a wet day over the course of January is essentially constant, remaining around 8% throughout.

For reference, the year's highest daily chance of a wet day is 9% on January 15, and its lowest chance is 0% on June 30.

Probability of Precipitation in January

The percentage of days in which various types of precipitation are observed, excluding trace quantities: rain alone, snow alone, and mixed (both rain and snow fell in the same day).

To show variation within the month and not just the monthly total, we show the rainfall accumulated over a sliding 31-day period centered around each day.

The average sliding 31-day rainfall during January at Gran Canaria Airport is essentially constant, remaining about 0.5 inches throughout, and rarely exceeding 1.2 inches.

The average rainfall (solid line) accumulated over the course of a sliding 31-day period centered on the day in question, with 25th to 75th and 10th to 90th percentile bands. The thin dotted line is the corresponding average liquid-equivalent snowfall.

Hours of Daylight and Twilight in January

The number of hours during which the Sun is visible (black line). From bottom (most yellow) to top (most gray), the color bands indicate: full daylight, twilight (civil, nautical, and astronomical), and full night.

Daylight saving time is observed at Gran Canaria Airport during 2017, but it neither starts nor ends during January, so the entire month is in standard time.