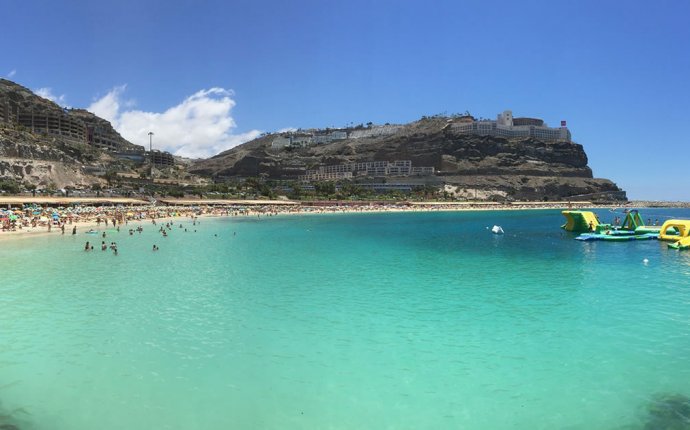 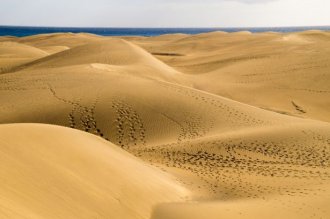 Playa del Ingles is situated in the south of Gran Canaria and is known best for it's beautiful sand dunes. It is a very popular gay holiday destination. The weather is all year round quite nice and warm.

It's only a few hours flight from Europe to Las Palmas and relative cheap to go when you look for a beach in autumn or spring. The most popular time to visit is September - November and March - June. In summer families with children take over. In mid winter you can also still go to the beach on some days, but don't expect it to be busy.

Playa del Ingles consists only of bungalow parks, apartment buildings and hotels. For most guys best place to stay is on walking distance (or better crawling distance!) from the Yumbo. Staying closer to the gay beach at Maspalmas can also be a good option, as it is only a few minutes by cheap taxi. We do not advise to stay any further, some all in packages put their guests in the middle of nowhere, with long taxi rides to Yumbo or gay beach.

The centre of gay night-life is the Yumbo Centrum. The Yumbo is an outside shopping center on 4 levels, with a park in the middle. There are only a few shops, most spaces are occupied by restaurants and (gay) bars and clubs. 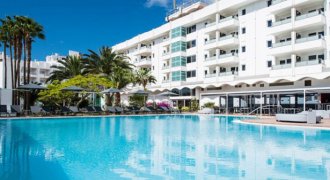 There are about 20 gay venues in the building. Early evening the terraces are full in high season. Later at night the other bars and gay clubs on the other floors get busy.

The can be reached by taxi to the the Maspalomas lighthouse and then a 15 minute walk, or via a 20 minute walk via red route through the dunes from the Riu hotel in Playa del Ingles. That walk is entertaining (but more about that later). The gay beach is easy recognisable at the the rainbow flag at the little kiosk near the water. If you want to be comfortable, you can hire a chair. You can also lay down between the men near the water on the dune at the right. As every gay beach, you're able to get a sun taint right all over, bath clothing is optionable. And therefore, you'll be able to see the beatiful young boys and the not so beatiful older guys in all their glory.

Cruising in the dunes

Behind the gay beach are the famous sand dunes of Gran Canaria. They are not only beautiful for photos, but the many bushes are cruisy aswell. It gets busy at around four o'clock, many guys leave the beach for a short and refreshing walk trough the the dunes, to explore the beauty and magnitude of gay nature. Some men camp here for the day instead at the beach, being out of the wind at wait for the catch of the day. Don't go there at night and watch out for police, sometimes they drive around in small 4x4 vehicles. 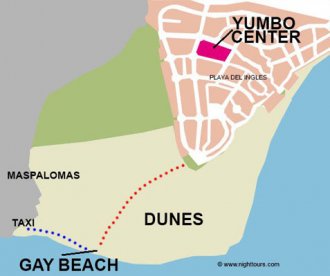 For dinner, Yumbo offers a scale of gay owned restaurants, where you can have cheap and rather decent food. And mostly, the menu is there for you in your native language! Dinner time is the Spanish one, so quite late around 21:00.

After dinner, around 11 at night, most people sit down at one of the terraces ofthe big gay bars on the ground floor for a beer and some entertainment. Popular ones are Junior, Adonis and Wunderbar Every night, Ricky's Cabaret Bar and Sparkles Show Bar hosts popular karaoke shows and drag queen entertainment. Around midnight many guys go to the Construction bar to have a beer, enjoy the dancers and maybe have a look in the darkroom. Next to construction is the Cellar bar, which has different themes each night (underwear, naked, jockstrap). On level 2 you find more cruise bars like Cruise, Prison.

After one, most of the young people are off to the video bars at the top floor Mykonos and Tubos. To finish the night of, the dancing crowd ends at club Mantrix. On the other side of Yumbo you'll find some more bars and clubs which get going late and go on till late at night, like Coco Loco, Macho Macho and Babylon XL (till very late)

There are some bars outside the Yumbo Center. At the Avda de Tiranjana, a 5 minutes walk from Yumbo, you'll find a trendy gay owned restaurant called Mundo. CITA is a smaller commercial center south of Yumbo and features also the Chaps cruise bar in the basement. However, this area does not attract as many gay visitors as the Yumbo, the ultimate symbol of straightforward gay pleasure.