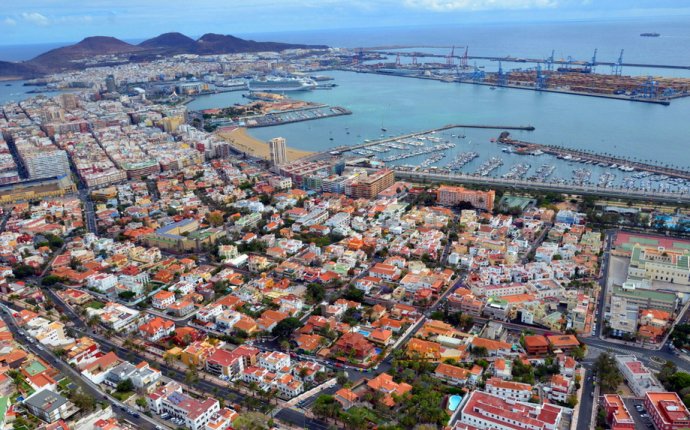 Las Palmas de Gran Canaria, the capital of the island, is located in the north-eastern part of the island set in magnificent scenery composed of two bays and their beautiful beaches – Playa de las Canteras and Playa de las Alcaravaneras.

Founded in 1478, Las Palmas de Gran Canaria boasts an important historical and cultural heritage, much of which can be found in the district of Vegueta, the oldest quarter of the town, which was declared a UNESCO World Heritage Site in 1990.

For almost 400 years the city was limited to the north within the perimeter of the walled quarters of Vegueta and Triana and during the 16th, 17th and 18th centuries the town grew primarily into the interior of the island as almost all the cities of the archipelago. Vegueta, Triana, San José and some small neighbourhoods inhabited by immigrants and fishermen mainly constituted the city of Las Palmas. Only in the 19th century – benefiting from the construction of the port Puerto de la Luz – the city start expanding to the north along the coastal strip and the districts of Arenales, Ciudad Jardín, Alcaravaneras, Santa Catalina and La Isleta emerged.

Las Palmas de Gran Canaria has an impressive infrastructure of hotels and apartments and its harbour Puerto de La Luz is one of the most important in all Europe, giving the city a very cosmopolitan image. Only under the impulse of tourism and economic activities of the 60s was the city finally consolidated and settled with a population that has doubled in the last 30 years (actually around 400, 000 inhabitants).

And there is plenty to keep you busy in Las Palmas. Whether you stay directly in the city or travel to the capital from elsewhere on the island, you are guaranteed a wealth of choices to compliment your holiday. In Las Palmas you will find the best of both worlds, a long stretch of sandy beach and the hustle and bustle of city life.

Spain-Grancanaria carefully selects only the best hotels on the island based on location, service and of course, price. The 5-star Hotel Santa Catalina is pure luxury; this magnificent building is something of a landmark in Las Palmas and regularly welcomes celebrity guests and even members of royalty. Why not join them? This gorgeous hotel really is special offering decadent guest rooms, unrivalled hospitality and a wealth of facilities. It is close to the stylish marina and Playa de las Alcaravaneras (one of two beaches in the capital). Guests can take a complimentary shuttle service to nearby Playa de las Canteras, a beautiful stretch of golden sand and tranquil turquoise waters.

There are two other fantastic hotels overlooking this beach; AC Hotel Gran Canaria and Hotel Cristina Las Palmas. They are perfectly located for people who love to relax and unwind on the coast while enjoying the benefits of staying in the heart of this exciting cosmopolitan city. Both hotels offer attractive, modern rooms and amazing amenities for the business and leisure traveller.