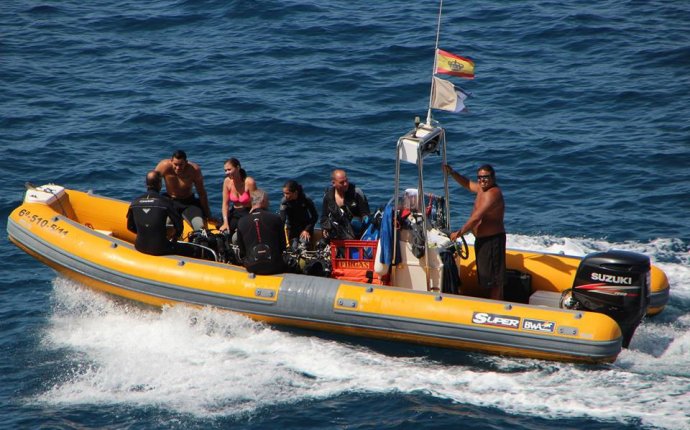 Year-round sun, warm, clear water and dramatic underwater volcanic seascapes draw divers to the Canary Islands. Sometimes called “The Fortunate Islands” due to the subtropical climate and sandy beaches, the islands of this Spanish archipelago lie at the eastern edge of the Atlantic Ocean, off the northwest coast of Africa. The Canaries, as they’re also known, were an important port-of-call for Spanish galleons taking advantage of the trade winds on their way to the Americas.

The seven largest islands – Tenerife, Fuerteventura, Gran Canaria, Lanzarote, La Palma, La Gomera and El Hierro – are premier European tourist destinations and attract more than 12 million visitors a year. Those who come can pick their spot and choose from bustling cities with great nightlife or sleepy little villages where stress just rolls away.

And that’s before you even get to the diving. Visibility of more than 30 metres/100 feet is normal, and water temperatures never drop much below 17-18° C/63-64° F, making it easy to enjoy the unique biodiversity. Divers will encounter both Atlantic and Mediterranean species, and some endemic to the islands themselves.

Water Temperature – The Canary Islands are bathed by the Gulf Stream, which regulates the water temperature, keeping it between 17-18° C/63-64° F in winter and around 23°C/73°F in summer. Typically, 5mm wet suits in summer and 7mm suits in winter keep divers comfortable.

Weather – Mainly mild winters and warm summers. Year-round warm, sunny weather with average temperatures varying from 17°C in the winter to 24°C in the summer.

Recommended Training – Take the PADI Deep Diver and PADI Wreck Diver courses for diving on the deeper wrecks. The AWARE – Fish Identification specialty course is also a good choice to help you identify the many unique species.

Note - Travel to any destination may be adversely affected by conditions including (but not limited) to security, entry and exit requirements, health conditions, local laws and culture, natural disasters and climate. Regardless of your destination, check your local travel advisory board or department for travel advice about that location when planning your trip and again shortly before you leave.

Topside Attractions - Take a hike up the side of a volcano in a national park, enjoy the buzz of the big busy tourist towns or relax on a beach enjoying the best climate in the world.