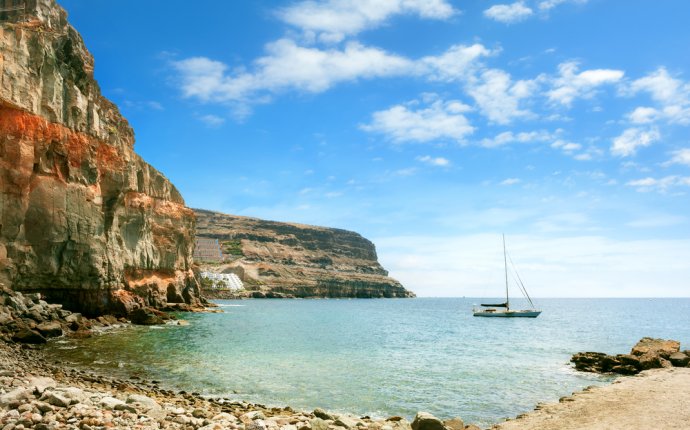 Gran Canaria is the third largest and most populated island in the Canary Islands – making it one of the most exciting islands to visit on holiday. The natural beauty of the island is tremendously varied thanks to its mountainous terrain and attractive sandy beaches. As the island has the largest population of any of the Canary Islands, it also has a vibrant nightlife, bustling cultural scene and plenty of interesting attractions and activities to enjoy; not to mention some fantastic beaches.

The unique geographic location of the island produces several microclimates within a very small area. Therefore, it is possible to experience a sunny day on the beach and a misty walk through lush green mountains on the same holiday. The island’s attractions offer a further contrast; there are plenty of typical tourist hotspots such as packed out water parks, as well as peaceful nature preservation areas that are relatively untouched.

Gran Canaria, Canary Islands is a great place to visit in January if you’re in search of some pleasantly warm temperatures and winter sun. At this time of year, the average temperature for the resort is 18°C, created by average highs of 21°C during the middle of the day and average lows of 15°C during the coolest part of the evening. With daily averages being 18°C every day, there’s no good or bad time to visit in January – whether you go at the start, middle or the end of the month, you’ll enjoy the same warm, sunny weather.

Even though January is a winter month, Gran Canaria still enjoys an average of six hours of sunshine each day at this time of year, along with median cloud coverage of 49% (partly cloudy) which hardly varies at all throughout the month. On an average day, the sky is clear/mostly clear 39% of the time, partly cloudy 31% of the time and mostly cloudy/overcast 22% of the time. This means that although you will get your fair share of cloudy spells if you visit Gran Canaria in January, you’ll also get plenty of chances to soak up the sunshine.

After December, January is usually the wettest month of the year for Gran Canaria, when the island is subject to an average of 25mm of precipitation which is spread out over the course of three wet days. Moderate rain is the most common type of precipitation you can expect to see at this time of year, when it falls on 46% of days with rainfall. This is followed by drizzle (27%) and light rain (16%).

The likelihood of precipitation occurring on the island during this time of year drops as the month develops, starting off at 30% on January 1st and falling down to 27% by January 30th. This makes the final week of January the best time to visit Gran Canaria if you want to keep the chances of your holiday being affected by rainfall down to an absolute minimum.

When it rains in Gran Canaria, it usually starts with overcast skies for an hour or so, followed by a spell of moderately heavy rainfall which rarely lasts more than 30 minutes. Shortly after the rain stops, the clouds disperse and the sun shines through. So even though there is a fairly good chance you’ll experience a shower during your January holiday in Gran Canaria, you’ll never get a full day of rain.

Despite having a sub-tropical climate, Gran Canaria is rarely overly humid. The relative humidity for the island in December typically ranges between 52% (mildly humid) and 85% (humid), rarely dropping below 36% (comfortable) or reaching as high as 100% (very humid). The air is usually driest around January 28th, when the relative humidity drops below 60% (mildly humid) three days out of every four. The air tends to be at its most humid around January 1st, when it rises above 77% (humid) three days out of four.

Gold by Marina has been voted the best hotel in Playa del Ingles by TripAdvisor. This hotel caters for romantic holidays for adults aged 18+ and even offers five different speciality packs you can book before you go: food and drink welcome pack; cava, rose petals and chocolate welcome pack and a 15-minute massage and spa product welcome pack, plus two erotic passion kits for couples. There are two swimming pools within the complex, as well as a large Jacuzzi, bi-thermal multi-hose showers and spa which boasts five facials, six massages, one manicure and one pedicure. There’s also the indoor Lobby Style restaurant which serves all kinds of alcoholic and non-alcoholic drinks, including smoothies and specialist teas, plus the outdoor Pool Style which serves breakfasts, cheese and meat platters, salads, sandwiches, pizzas, pastas and desserts. Guests can choose between rooms with terraces/balconies, rooms with superior balconies, junior suites, superior junior suites and master suites, each of which is decorated in a colourful vintage 1950s-1970s style and features free WiFi access, full kitchen and air conditioning.